February 3, 2014 was one of my my most memorable days on the farm, both bad and good.

The winter of 2014 was turning out to be one of the hardest we’d had in many years.  It was extremely cold. Though we had not had any huge storms, the snow kept building up a few inches at a time without any thaws to melt it down.  If winters are mild, things are slower for us, but with cold and snow accumulation, getting daily chores done becomes very challenging.   There is extra snowplowing needed to keep the driveways and lanes open for milk and feed trucks, as well as plowing to getting the manure out to the fields.   Often the water fountains for the cows will freeze and have to be thawed and sometimes repaired.  The silage and bedding freezes so it has to be  changed more frequently  or broken up for for the cows.   We had been dealing with it, but we were getting weary.

On February 3, I had a call from Uncle Fred (Fred Jr.) about 3:30 a.m., the kind of call you never want to get.   He went down to the bottom barns to push up feed and found one of the two barns caved in.  These barns were built in the mid 70’s to house the milking herd.  They now held about eighty heifers in two groups, those that were breeding age and springers (which are heifers that are within a couple of months of having their first calf.)  The barn that caved in had two rows of stalls on the outside and the feed bunk in the middle where they all ate.   The other barn had just stalls for resting.

It was about -10 degrees F that morning.  What a horrible sight.  There was so much snow on top of the roof you could hardly see anything.  We spotted some of our trapped heifers by the steam you see rising from their nostrils, but they were trapped under all that snow, steel and wood.   The snow was about two feet deep around the barn so you couldn’t get around.  Cousins Dan, Sam, Duane and I started digging out what we could with skidsteers (Bobcats), saws, shovels, and cutting tools. 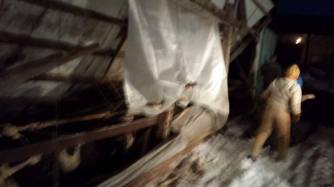 My Dad (Marvin) started plowing snow out to make room to pile debris and for vehicles.  It was a mess.  The worst part was having the heifers trapped under debris bellering and we couldn’t get to them.   The roof was still still largely intact and covered with the heavy snow. 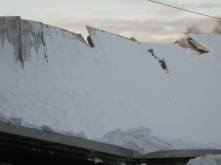 Thankfully we discovered that most of the cows were resting in the other part of the barn. The heifers who died had been standing at the feed bunk or in the alley. Sadly, we had to shoot a couple of trapped cows. The most heartbreaking was #301. She was one of our triplet heifer calves that had been born on New Year’s Day of 2013.

Here is a picture of the triplets when they were six days old:

The rare heifer triplets and their mother 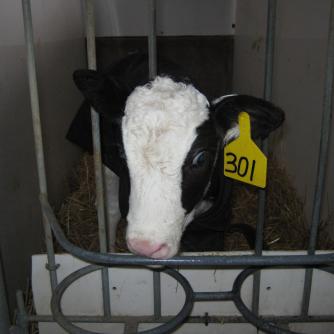 We were able to rescue about a dozen that were laying down in their stalls. The stalls prevented the roof from landing on them. Altogether we lost nine heifers who were either killed in the collapse or had to be shot because they were severely injured.  Others in their stalls were scraped and banged up but survived.

Uncle Fred and the milkers kept the morning chores going and my dad (Marvin) started feeding the cows for me so I could continue to help rescue heifers. After feeding, my dad and Dan went to go manure hauling.  Despite the collapse, we still had to keep up our morning routines to take care of the rest of our herd.

As the sun came up, phone calls started going out.  My brother Randy who seems to know about everybody, contacted Cripps Fontaine Excavating.  They sent an excavator our way with a grapple for demolition.  Best Way Disposal sent dumpsters for the debris and dead stock.  Cheryl Vlietstra offered to feed us breakfast.  Aunt RuthAnn brought coffee and donuts.  A friend of my cousin Becky, Mandy Schippers brought treats. Travis Gernaat and Mark Seekman started running new wiring to the water fountains which had all froze because the electric service was ripped off when the barn colllapsed. So many others showed up to help through the day in various ways: Seth Verschoof, Dena and Julie VanGemert and others sorted the heifers out and moved as many as there was room for to other barns. Josh DeHaan, Doug Meyer,  Ben Ritsema, John  and Cheryl Vlietstra’s kids and others helped too.

By late morning the excavator arrived from Cripps Fontaine.  Kurt Fontaine and Kevin Vlietstra started pulling debris out. Lots of people helped clear remaining snow and debris out of the lot.  By late afternoon they had everything pulled out and we went to work repairing the feed bunk and gates. 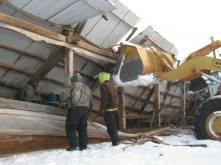 Uncle Fred worked on getting the frozen fountains thawed after the electric was working. Steve VanGemert brought two semi loads of concrete retaining wall blocks which we used to make new fencing to hold the cattle in the now open feed lot.  I was starting to get pretty tired.  I remember being relieved to see Jay VanDyk show up when he got out of work.  He’s one of those guys where you don’t have to say anything. He can see what you’re trying to do and he knows how to get it done. He helped Sam, Mark Seekman and myself  finish repairing the feedbunks and gates.  It didn’t take that long to finish up.

I think by 7:30 p.m. that night we had all the remaining heifers back eating out of their feed bunk under the moonlight and laying in the stalls of the remaining barn.  We were able to use it that way for about ten months until we built a new barn for them up on the hill.

In the following days, Don LaRoy, a local builder came and reinforced the trusses on the remaining barns so they woudn’t fall. Brian Seiser and I cleared the snow off the barn that was still standing. Dan, some neighbor kids and I worked  to shovel snow off the other older barns.

It was a very trying time, but it was really heartwarming to see how everybody pitched in on a bitter cold day and got all that done.  There are alot of good people out there.  I still can’t believe the mess that was there and how you don’t even know where to start, yet it all was functioning by the end of the day.  I know there are others who helped whose names I’ve missed, but what they did is not forgotten. 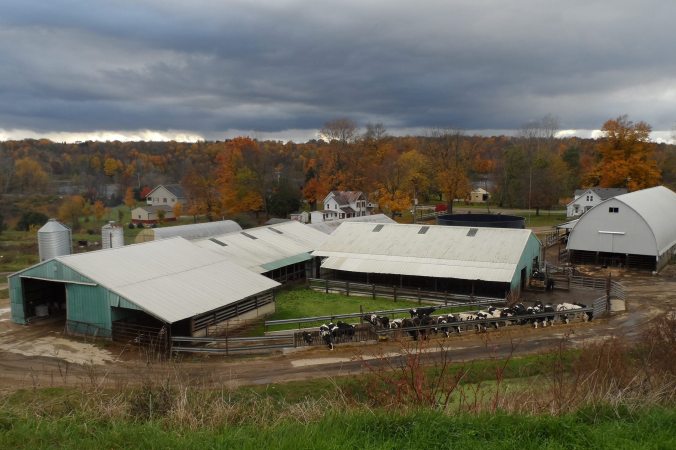 In August, 2014 we had a dinner to thank all the neighbors, people and businesses who were so generous to help us with their time and skills.

Thanks to Sam Vlietstra for helping with details and pictures for this page.

We welcome and appreciate your comments.  If you have any memories of that day you would like to add, please share them here.